on Wednesday, March 18th, 2015 in Healthy Eating. No Comments 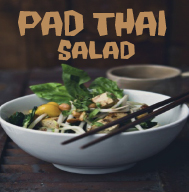 For Salad: Place all veggies in a large bowl. Sprinkle dried coconut over top.
For Dressing: Place all dressing ingredients in a blender. Blend until smooth.
Pour dressing over the veggies and mix until combined. Serve with lime.